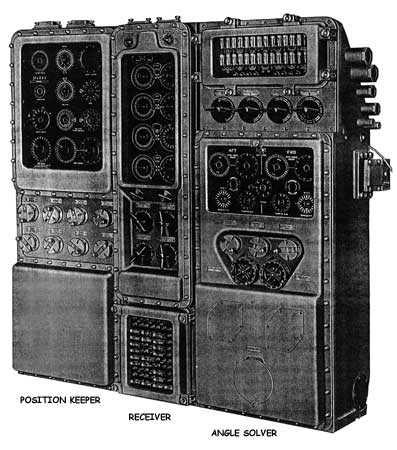 The TDC aboard Cod is a true mechanical computer.

The TDC was unique in World War II. It was the computational part of the first submerged integrated fire control system that could track a target and continuously aim torpedoes by setting their gyro angles. The TDC Mark III gave the U.S. fleet submarine the ability to fire torpedoes without first estimating a future firing position, changing the ship's course, or steering to that position. Instead of hoping that nothing in the setup changed, a fleet submarine with the TDC could fire at the target when the captain judged the probability of making hits to be optimal.

In World War II a torpedo's gyro angle was set mechanically while it was in the tube. A shaft, known as the spindle, slips into a socket near the housing of the torpedo's course gyroscope. When the fire control system rotates the shaft, the gyroscope rotates. After being fired, the torpedo travels on a straight course for a known distance called the "reach". A delay in the release of the torpedo's gyro steering mechanism by a threaded shaft determines the magnitude of the reach. Once engaged, the steering mechanism brings the torpedo to a new course based on the angular offset of the gyroscope.

The position keeper solves the equations of motion integrated over time. The result is a continuous prediction of where the target is at any instant. Successive measurements of the targets' position are compared to the position keeper predictions and corrections for error are introduced with the hand cranks. The predicted target position becomes more accurate as more measurements make the corrections smaller. It is typical to get an accurate track on the target after about three or four observations under good conditions.

The U.S. Navy thus had a system that would point the torpedoes at a target as the fire control problem developed. The TDC Mark III was the only torpedo targeting system of the time that both solved for the gyro angle and tracked the target in real time. The comparable systems used by both Germany and Japan could compute and set the gyro angle for a fixed time in the future, but did not track the target. Thus the idea of the position keeper, and its iterative reduction of target position error was unique to the U.S. Navy, and represented a distinct advantage.

Webmaster's note: Thanks to Terry, Cod's Mark IV TDC has been brought back on-line (as of June 2003) and appears to work perfectly once again! According to Terry this is now the only working Mark IV TDC in the world. Click here to see the TDC Resoration page.